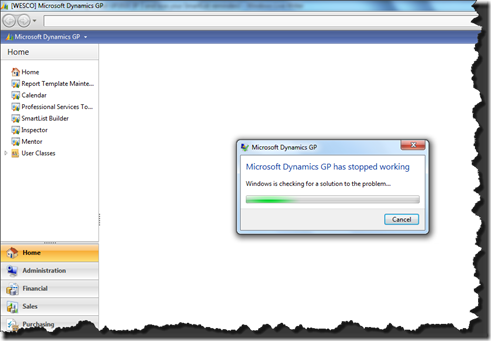 SELECT * FROM SY01404 WHERE DICTID = 3830
SmartList builder’s product ID is 3830.
This problem does NOT require you to disable SmartList Builder itself, you just cannot build any Reminders off of the SmartLists you create. You can:
The bottom line is that you still have access to the custom Favorite, you just can’t create a reminder based on it.
While there are many ways to present the information that was captured by the Reminders, I haven’t been able to come up with an alternative that is as elegant and user-friendly as the SmartList Reminders.
I welcome anyone’s ideas on how to easily replace the SmartList Reminders until the time we get a fix from Microsoft.
Go forward with caution! Consider yourself warned.
Until next post!
Leslie Vail
Dallas, TX
Posted by Dynamics Confessor at 8:16 AM

Thanks for the post. This is going to be huge for one of my clients that uses Smartlist Builder extensively. We have to upgrade to SP3 to fix a payroll bonus calc problem but this would have certainly been a big surprise, particularly the crashing part!