The Customer is its own Parent

Recently I've read some posts regarding National Accounts. There are a few items I wanted to note.
Moments after I posted the above, I received a note from Brenner Klenzman at WilloWare Software  about a neat customization you can get from them. Here's his story:
" As an ISV, a VAR is a National Account for us [Willoware], with their Customers (end users) being the children in the National Account.
However, there is often more than one VAR/partner involved with a single customer.  So one customization allows us to assign any VAR as the “parent” on any given invoice.  Essentially there is a Primary Parent, and an unlimited number of Secondary Parents.
Also, since customers often change VARs, another customization allows changing the Primary Parent (i.e. the National Accounts Parent)."
I hope this helps someone who may be struggling with National Accounts.
Live the dream!
Leslie
﻿

I recently looked at a relatively new product on the market for integrating data into Dynamics GP. It's called VKonnact and it uses eConnect for the backend but shields the user from all of the eConnect complexities. While I haven't finished my review yet, what I've seen so far is very interesting. It's more user friendly than other products in the channel and has a user interface that looks nearly identical to the GP windows you are used to seeing. If you are thinking about purchasing an integration solution, definitely give this one a look. More to follow once I finish my review.
Live the dream!
Leslie
Posted by Dynamics Confessor at 9:37 AM 2 comments:

~internal~ Windows have no place in security

Have you ever wanted to use security to disallow the system Setup Checklist? You access this window using the Microsoft Dynamics GP button and then Tools > Setup > Setup Checklist. As it turns out, you cannot turn it off. Any window resource that has the name ~internal~ is not available to the security model. Now, if you hacked the dictionary (NOT recommended and a violation of your license agreement) and changed the object's name, you could then get to it, but that's not a good idea.

I had a bright idea once and thought I could use Modifier to move all of the fields off of the window. That worked fine, except it wasn't available to select in the Alternate/Modified Forms and Reports window (such a catchy name). I read a GPUG forum post from Jeff Martin that said you could include the Setup Checklist window in a VBA project, so I set out to see if I could get it to work with VBA. Sure enough, you can cause the window to open invisibly, but that doesn't really solve the problem. The reason for this post is to publish a tidbit revealed to us by David Musgrave of Winthrop Development. He said that "part of the issue with the checklists window is that the one window is used for all checklists from all series". I did not know that. Another mystery solved. Thank you David. 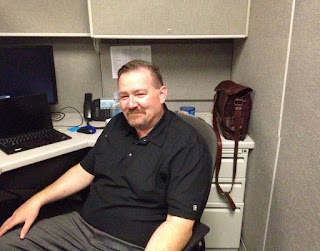 Can you believe it?! Harry Lee, Redbeard himself, a fellow Microsoft MVP, has joined the fine people at the consulting firm of Conexus SG in Dallas, TX. I didn’t recognize him without his hat, and he didn’t recognize me without my cape, but know for sure that Conexus SG now employees one of the finest Dynamics GP consultants on the planet.

If you are in the Dallas, TX area and need help with Dynamics GP, be sure to check with Conexus SG. Of course, you should check with me first.

Live the dream!
Leslie
Posted by Dynamics Confessor at 5:39 PM No comments: