We all wait with anticipation for the release of the real code update.

Posted by Dynamics Confessor at 12:06 AM No comments:

MVP Mark Polino is at it again. As if it wasn’t enough to write the ultimate tips and tricks book in Microsoft Dynamics GP 2010 Cookbook, he has developed a new web search called My GP Search. This is an amazing piece of work! Find it HERE. It’s a simple one-stop search engine for GP related information. I do not know where he finds time to do so much. Just three years ago we didn’t have blogs or communities or all the sites we rely on today for GP information. Today we can find nearly anything. So much information is now available that it is hard to find everything. Well, those days of going from blog to blog are over! Check it out!

Posted by Dynamics Confessor at 5:39 PM No comments:

How is FICA/S wages and withholding calculated?

It’s that time of year again! W-2s are due out early next week and we are just now looking at the numbers. You know who you are!

Have you ever noticed a difference between the Social Security Wages and withholding reported on the Form W-2 and the amounts in the Employee Summary record?

Below are the components I discuss:

2. The Year-end Wage Report reads from the year-end wage file, so it shows the actual amounts withheld regardless of the limits

3. The Validation Report does two things

b. Calculates what FICA withholding should have been in accordance with the FICA wage limit and percentage captured when the year-end wage file was created

c. Any differences are reported on the Validation Report

4. The W-2 form that appears in the Edit W-2 window is reading the year-end wage file, so it shows the actual amounts withheld

5. The amount that appears in the Social Security Wages W-2 box is the lessor of:


a. The Social Security Wages from the year-end wage file or,

b. The FICA limit captured when the year-end wage file was created.

6. The amount that appears in the Social Security Withheld W-2 box is the lessor of:


a. The amount actually withheld as captured in the year-end wage file or,

7. The amounts appearing on the W-3 are the sum of the amounts on the W-2s. The W-3 amounts are not the same as the Year-End wage report amounts.

Have fun with it!
Until next post!
Posted by Dynamics Confessor at 10:39 PM No comments:

Posted by Dynamics Confessor at 12:05 PM No comments:

Microsoft announced that the much anticipated Round 2 for GP2010 is out. The update filename is MicrosoftDynamicsGP11-KB2477921-ENU.msp (for U.S. English).

Read about it here: https://mbs.microsoft.com/partnersource/downloads/taxupdates/usgptu10.htm?printpage=false

The Tax Tables themselves are here: TX.cab Round 2

Here is an excerpt from the U.S. 2011 January Payroll Tax Update For Microsoft Dynamics ® GP Round 2

To install the tax table update:

You can run the tax update installation from any workstation. The update installs payroll tax table data on the server computer where your existing Microsoft Dynamics GP application data is located. You need to install the tax table update only once.

To install the program code update:

You need to install the update on the server as well as every workstation that runs Microsoft Dynamics GP.

Installing the program code update for Release 9.0 (links to a different part of the document)

Installing the program code update for Microsoft Dynamics GP 2010 or Release 10.0 (links to a different part of the document)

Before you begin, ask all Microsoft Dynamics GP users to exit the application until the update is complete. Exit all other applications, turn off the screen saver, and back up important data (including Forms.dic, Reports.dic, and Dynamics.vba if they exist) before you proceed with the installation.

Note: The Payroll Update Engine, which is used to install the tax table update, is not supported on 64-bit operating systems when running Release 9.0, or Release 10.0 prior to Service Pack 3. For more information, refer to the Knowledge Base article at

The update filenames are:

The update filename is MicrosoftDynamicsGP11-KB2477921-ENU.msp (for U.S. English) and

The file incorporates all previous code updates, including Microsoft Dynamics GP 2010 and Release 10.0 Service Pack 5, the 2010 U.S. Payroll year-end update, and all recent hotfixes. If you are using Canadian Payroll, it also includes the Canadian 2010 Year-End Update/2011 Tax Update, as well as all previous Canadian Payroll tax updates.”

Posted by Dynamics Confessor at 10:41 AM 5 comments:

Change the Date at Midnight without the Dialog

A friend asked me recently how to get the date to advance if you are using the .ini switch SuppressChangeDateDialog=TRUE.

First, let me explain the .ini switch. If GP is open overnight, a dialog displays at midnight asking you if you want to advance the date.

Many firms run integrations overnight and this dialog displaying in the middle of an integration will cause it to crash. To keep the dialog from presenting, the ‘SuppressChangeDateDialog’ .ini switch was developed. If this switch is included in your dex.ini file, the date dialog will not be presented and therefore the integration will not crash.

A byproduct of the .ini switch is that the date does not automatically advance. So, we have a dilemma. In order to force the date to advance while suppressing the Change Date dialog, a tool was developed by Microsoft (then Great Plains). The tool is known as the ‘Update User Date’ utility. There is no charge for it, but you have to ask Tech Support in order to get it.

For versions GP 2010 and beyond, this utility is included as one of the free tools in the Professional Services Tools Library. Every GP installation should include this module because so many free tools are included. You can find the Update User Date utility in the upper left-hand corner of the Professional Services Tools Library window. In order to turn the functionality ‘on’ simply check the box to the left of the radio button. 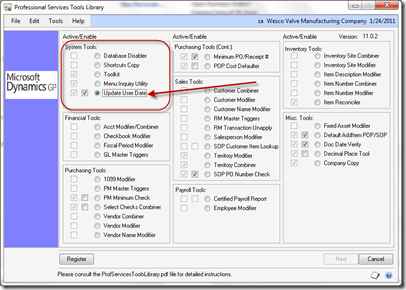 I hope this helps you with your integrations.

Check those 1099s! You may have more than you bargained for!

Version 10 introduced ‘date sensitive’ 1099 reporting. This allowed us to print 1099s for a year without regard to the actual closing date for that year. Prior to this, if you didn’t close A/P right at the year end, it was not possible to cut off payables for the purpose of accumulating 1099 amounts.

The introduction of this new feature brought with it a new ‘gotcha’ in the world of 1099 reporting. If you have a vendor incorrectly marked as a 1099 vendor during the year (and amounts are paid to the vendor in excess of the thresholds), a 1099 will be issued for that vendor even after you change the setting to ‘Not a 1099 Vendor’. In order to prevent the Form 1099 from printing, you need to zero out all of the 1099 amounts recorded in the 1099 Details window. (Purchasing Area Page > Cards Content Pane >1099 Details.)

In order to see the 1099 Details for a vendor, first mark them as a 1099 vendor. After the vendor is marked, remove any amounts from the 1099 Amount column in the 1099 Details window. Don’t forget to reset the 1099 option after clearing out the balances. Once the balances are cleared, the 1099 will no longer print for this vendor. Marking the vendor as ‘Not a 1099 Vendor’ is no longer sufficient to cause the 1099 not to print.

This was an issue in version 10 and continues to be an issue with version 2010.

Posted by Dynamics Confessor at 11:51 PM No comments: